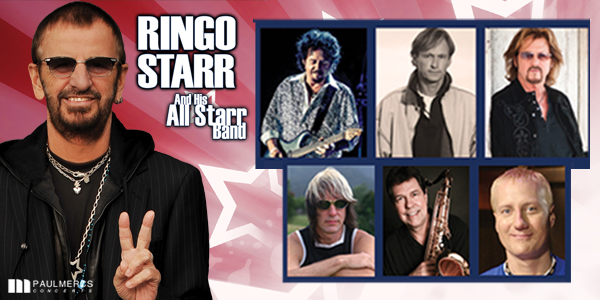 “Valentine’s Day became a history making event in Tyler in 2015. You couldn’t help but feel the collective energies from each member, with Ringo orchestrating it all beautifully. The band made a colossal and crowd rockin’ finish with Beatles favorite ‘With A Little Help From My Friends’ in which the entire auditorium-packed audience exuberantly participated, culminating in a tremendous din of applause and cheering. The night was truly magical.” – AXS Live

“This latest incarnation of Starr’s traveling show has been together now going on three years and watching them interact as an actual band, rather than a supergroup taking turns out front, is almost as fun, almost, as watching and screaming “I love you” at the front man who will forever be part of the biggest rock ‘n’ roll band of all time.” – Sarasota Herald-Tribune

Vancouver, BC, March 23, 2015 Fresh off a February/March 2015 All Starr Tour, Ringo announces another string of tour dates with his current All-Starr Band, bringing the band he doesn’t want to stop playing with coast-to-coast across North America from October 1 to October 31.

Prior to the tour on September 21, Ringo and Genesis Publications will publish his photography book, PHOTOGRAPH, in wide release. This Spring will see the March 31 release of Ringo’s new album, POSTCARDS FROM PARADISE, by Universal Music Enterprises, and on April 18, he will be inducted into the Rock and Roll Hall of Fame, where he will be honoured with the Award for Musical Excellence.

In PHOTOGRAPH, Ringo Starr reveals never-before-seen photographs and mementos from his archives, sharing memories of his childhood, The Beatles and beyond. Ringo’s lens captures his Beatles bandmates in pensive and playful moments, portraying them from the point of view of an insider, friend and skilled photographer. In an original manuscript of over 15,000 words, join Ringo growing up amidst the excitement of the emerging Merseybeat scene, as he remembers his first car, drum-kits, girls and bands on his ‘road of happy drumming’. From Pwllheli to Delhi, obscurity to superstardom, his travels are recounted with honesty and hilarity.

That same honesty and hilarity continues on the road now with the All-Starrs, with whom he has forged a bond that is evident in every show they play. Ringo’s playful spirit also comes across through his Twitter, where he shares his candid and of the moment photographs and trademark humour.

“I love pictures put together, showing different times of your life, “Ringo said about the book, “At the time, I never thought that there would be a whole book of my photographs.”

PHOTOGRAPH was originally conceived as a limited edition book of only 2,500 copies, which sold out within weeks. Two years later, Ringo Starr and Genesis Publications announce the ‘Open Edition’ – a more accessible and affordable printing of his book to be released in bookstores this September 2015. The author is donating all royalties to the Lotus Foundation.