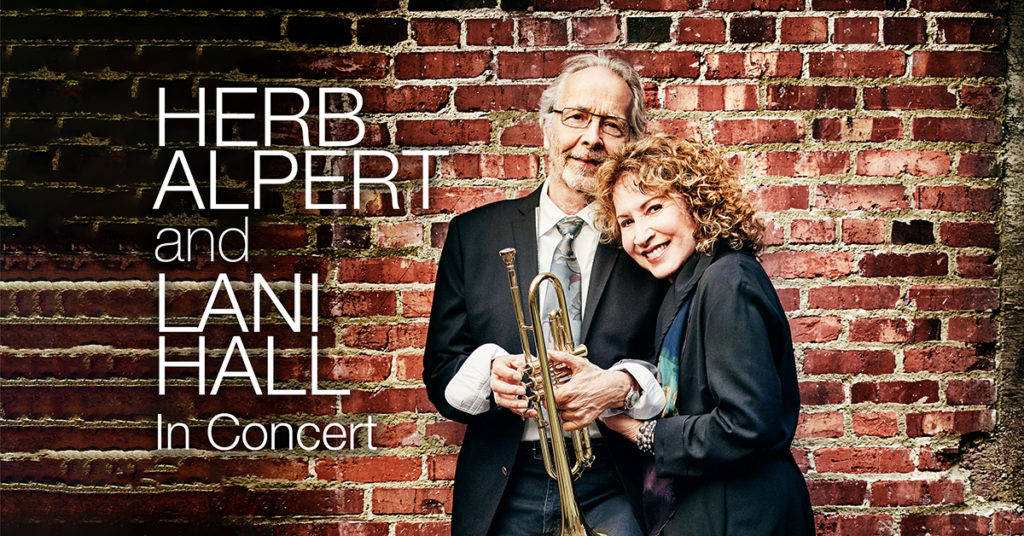 Herb Alpert and his wife, the Grammy award-winning vocalist Lani Hall, and their incredible band, perform an eclectic mix of American standards, Brazilian jazz, some Beatles, some classic Tijuana Brass & Brazil ’66 songs as well as many surprises. The shows are informal as Herb loves to answer questions from the audience about his and Lani’s music careers, A&M Records and the many iconic artists they have both worked with over the past 50 years. The 2022 tour features a giant video screen that displays hundreds of classic photos, videos and various memorabilia from Herb & Lani’s music careers. A really exciting show from two legendary performers!

September 20, 2019 marked the release of Herb’s upcoming album, Over the Rainbow. The album features 12 songs including an original called “Skinny Dip” and a cadre of classic and well-known tunes interpreted and performed in a way only Alpert can deliver. Last October Herb released Music Volume 3 – Herb Alpert Reimagines the Tijuana Brass which reached #2 on the Contemporary Jazz Charts. The Music Volume 3 release, as well as the holiday music video, Carol Of The Bells/We Wish You A Merry Christmas – Medley from The Christmas Wish album rounded out a successful 2018 which included a 50 city tour.

A 2006 Rock and Roll Hall of Fame inductee, Alpert’s extraordinary musicianship has earned him five #1 hits, nine GRAMMY® Awards, the latest from his 2014 album, Steppin’ Out, fifteen Gold albums, fourteen Platinum albums and over 72 million records sold. Herb Alpert & The Tijuana Brass propelled his sound into the pop music limelight, at one point outselling the Beatles two to one. In 1966, they achieved the since-unmatched feat of simultaneously having four albums in the Top 10– and five in the Top 20. Herb Alpert also has the distinction of being the only artist who has had a #1 instrumental and #1 vocal single. Billboard also listed Herb as #7 on their Greatest Of All Time Billboard 200 Artists.

Two-time Grammy award-winning vocalist, Lani Hall, was the lead singer and “voice” of Sergio Mendes’ iconic group, Brasil ’66. She has the distinction of recording over 22 albums in 3 different languages: English, Portuguese and Spanish. She is also known for her recording of the theme song to the 1983 James Bond film, Never Say Never Again. She penned many English lyrics for the Brazilian songs she sang while with Brasil ’66, as well as throughout her solo albums. She is also the author of Emotional Memoirs, a book of short stories, fiction and non-fiction, with personal memoirs that lead the reader into each story.

Through the Herb Alpert Foundation, Herb and Lani have dedicated their lives to philanthropy, funding programs that help bring creativity to young students and keep creativity alive for all the arts, for artists young and old, including jazz education and programs that teach compassion and well-being. 2019 also marks the 25th anniversary of the Herb Alpert Award in the Arts celebrating 125 awardees over the past 25 years.