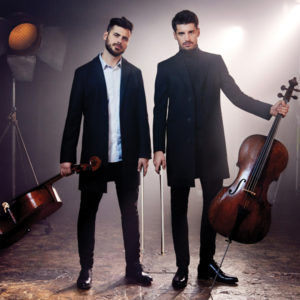 Vancouver, BC, November 13, 2017 — Paul Mercs Concerts is pleased to announce that due to an overwhelming demand for the 2CELLOS: THE SCORE TOUR, a second show has been added on April 13, 2018 in Toronto, ON.

Vancouver, BC, September 25, 2017 — Paul Mercs Concerts is pleased to present the following concert dates for 2CELLOS: THE SCORE TOUR, in celebration of their newest album, SCORE.

2CELLOS, music’s most electric and dynamic instrumental duo, go to the movies for their new album Score. Bringing 2CELLOS’ game-changing sound and style to the most popular melodies ever written for classic and contemporary movies and television…. and they now take that sound on tour.

An international sensation, 2Cellos unique 2014 video version of “Thunderstruck” is currently rocking YouTube with over 90 million views and their other more recent videos following closely behind. Croatian cellists Luka Sulic and Stjepan Hauser have created three high-energy albums for Sony Music Masterworks. Score finds them exploring a more traditional sound-world. “The album represents some of our favorite pieces of music by our favorite film composers. Having the opportunity to arrange them for cello whilst working with the world class London Symphony Orchestra has been a dream come true,” says Stjepan. The album opens with an arrangement of Ramin Djawadi’s melodies that score Game of Thrones, culminating in the bold Main Title theme, in which the stirring sound of cellos announces each of what may be the most eagerly awaited episodes in contemporary television.

The vocal beauty of the cello’s sound is a perfect match for a brace of romantic themes. They include the Henry Mancini/Johnny Mercer song “Moon River” from Breakfast at Tiffany’s; Ennio Morricone’s beautiful themes for Cinema Paradiso and Malena; Nino Rota’s love theme for The Godfather; Francis Lai’s Oscar-winning theme from Love Story; Hans Zimmer’s theme from Rain Man; and Stanley Myers’ haunting “Cavatina” heard in The Deer Hunter.

2CELLOS have forged a signature style that breaks down the boundaries between genres of music, from classical and film music to pop and rock. As impressive when playing Bach and Vivaldi as they are when rocking out, Sulic and Hauser know no limits when it comes to performing live. They have sold out shows around the globe and also performed with Sir Elton John as part of his band, as well as opening his shows to rapturous acclaim.

“…Go and see them live, because it really is astonishing! I can’t remember seeing anything as exciting as them since I saw Jimi Hendrix live back in the 60’s…”
– Elton John